Let’s get this out of the way up front: Robert Galbraith is the psuedonym J.K. Rowling uses when she writes hard-boiled detective fiction.  There are several reasons why I think she decided to use a psuedonym, the most important of which is that reviews of her last book, The Casual Vacancy, all basically said, “Yeah, the book is okay.  But it’s not Harry Potter.”  Having already written and published seven mammoth tomes of Potter, that particular feedback must have been singularly maddening for Ms. Rowling, who was, I’m quite sure, looking for independent reviews of her newest work on its own merits.  So she wrote her next book under a name that no one had ever heard of, and for three months, The Cuckoo’s Calling got to stand on its own.  I know for a fact that the book’s early reviews were good, and Google News claims that the book itself sold some 8,500 copies in those first three months of annonymity, which is more than the first Potter book sold in its first three months, and if that’s not enough, it also had at least two offers for some kind of television adaptation.  Were Galbraith anyone other than a beard for Rowling, that success would have been considered truly remarkable for a previously unknown author. 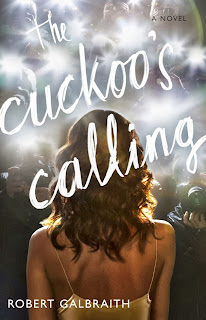 The story itself is a good one.  Former British Army Special Investigative Branch (SIB) detective Cormoran Strike has let himself become a down on his luck private investigator when a lawyer named John Bristow walks into his office.  Bristow wants Strike to re-investigate the death of his sister, the ultra-famous supermodel Lula Landry, who’s apparent suicide has only just been pushed out of the tabloids after spending some three months as front page news.  Strike initially resists, of course, but he and Landry have some personal history, and that history--and his urgent need of ready cash--forces Strike to reconsider.  Wackiness ensues.
I loved this book, but I gotta say that I think it adds something to know who really wrote it.  The book itself is scathing in its continual indictment of the British moneyed classes, to the point where I started wondering early on if it wasn’t equal parts detective novel and writing-as-therapy for Rowling, who has over the last few years become one of the richest women in the world.  This is, after all, a woman who famously wrote for her kids while she was one the Dole, and now, having reached the heights of financial and professional success, seems to loath the company in which she’s found herself.  What affection Rowling has for her characters is saved almost entirely for the Working Classes, the more down-and-out the better.  True, Rowling seems to have some affection for the rags-to-riches fashion designer Guy Somé, but other than that, everyone who’s got two pence to rub together comes off as an entitled twat, usually with a drug problem.
The other thing that’s notable about this book is that it’s vulgar in the extreme.  There’s not some huge body count, nor are there graphic descriptions of sex, but the characters all swear--a lot--and the attitude of the narrative in general is, as I said, scathing.  It cuts to the bones, turns back, re-sharpens the knife, and then starts carving again, immediately, sparing nothing.  Rowling’s eye is well-tuned here, and her descriptions are immersive, but there’s little that’s uplifting, especially in the book’s first half.  I mention this because Sally and I bought the audio version of this book from iTunes for the drive up to our cabin in Maine this past summer, having no idea what we were getting into.  But we didn’t have time to listen to it on the drive, which turned out to be a blessing because, well, I couldn’t have had on with my kids in the car.  It’s just not that kind of story.  I loved the story that it turned out to be, but it’s decidedly not for kids.
I don’t read much detective fiction.  I’m good for maybe one or two mysteries a year, usually one from the Fletch series and an Arkady Renko novel if there’s a new one out.  But The Cuckoo’s Calling was terrific.  I can’t recommend it strongly enough, especially if you happen to like mysteries and don’t mind a little spicy language.  Rowling has apparently already finished the manuscript for the sequel, and speaking personally, I can’t wait until I get my hands on it.  I miss having the last one around already.
By Danno E. Cabeza - October 16, 2013