The Mystery of Malvern Manor

This is a short adventure I wrote for my kids and a few of their friends last weekend.  We wound up with a party of seven 1st level characters, including Hannah playing Sneakatara Boatman as a warlock of Loki, Emma playing a drow paladin of Hades named Victoria, and my wife Sally playing Maleeka, a mute half-orc barbarian.

We had a total of five kids under age 12, and they all had a good time.

This adventure is set in Breakwater Bay, a small fishing village on the Isle de Mont Deserette along the northen frontier in the Wanderhaven setting.  That said, you shouldn't have any trouble transporting it into a different setting if that better suits your game.

The Mystery of Malvern Manor 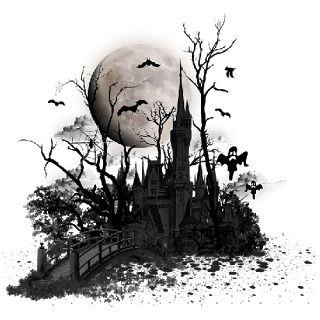 The party has shipwrecked in the frontier town of Breakwater Bay, an isolated fishing village on the Isle de Mont Deserette far from the mainland of the Kingdom of the Western Isles.  Baron Pavel Pavelovitch holds Breakwater Bay and its surrounding territories by grant from the king, but in practice, his rule extends only as far as he can deploy his household guard.  Although the party has made it safely to shore, their belongings sank along with their ship, leaving them with little more than their weapons, armor, and whatever gold was in their pockets at the time of the wreck.  To make ends meet, the party has been working for Cassius Ironhide, clanleader of the Ironhide dwarves, collecting on debts and doing other unsavory business with which Cassius himself wishes no outward involvement.
As the adventure opens, Cassius has dispatched the party to the shop of Xerxes Goldlighter, a local silversmith.  Xerxes owes Cassius some 500 golds but has so far refused to pay.

After the PCs bust up Xerxes’s shop, they are arrested by Baron Pavelovitch’s household guard.  The Baron is upset at the trouble that the party has caused, but unfortunately, he is also in need of competent adventurers.
The Baron’s son youngest Anstiss (his “worthless” son) has gone missing.  The baron apprenticed Anstiss to Morderai Malvern, a local mage of some note, in an attempt to keep both the mage and his son out of trouble.  However, the baron has not heard from his son in months, and since the Harvest Festival just passed without an appearance by either Old Man Mordercai or Anstiss, the baron has started worrying.  He sent a squad from his household guard to investigate, but they never returned.  He cannot afford to send more of his personal guards, but he knows that he must do something.  Fortunately, there’s a pack of worthless adventurers in town.  He’s willing to pay for a little help.

1. Xerxes Goldlighter.
Xerxes’s shop is a small but successful-lookin place.  When the PCs enter, Xerxes is standing behind the counter.  A pair of fancy cases displays silver jewelry behind glass panels.  A decorative suit of armor sits in each of the corners nearest the back of the shop.
Xerxes knows that he owes Cassius money, but he initially denies it, although a successful Insight check (DC 12) reveals the truth.  A successful Intimidate check (DC 15) combined with physical violence directed at the display cases will cow Xerxes into submission, but no amount of threats can change the fact that Xerxes’s shop is, in fact, losing money.  He doesn’t have the 500 golds that he owes.
When the PCs move to break Xerxes’s legs, the armor in his shop animates and a pair of guardian Blink Dogs teleport in to defend their master.
Lvls 1-2 Xerxes (human commoner), Animated Armor, 2 x Blink Dogs
Lvls 3-4 Xerxes (human commoner), 2 x Animated Armor, 3 x Blink Dogs
After the fight, Baron Pavelovitch’s household guard arrives to arrest the party for vandalism and general thuggery.  They make it clear that the Baron wants to talk to the PCs; that he needs their help.

2. Baron Pavelovitch.
The PCs are ushered into the Baron’s throne room.  The Baron would like to throw them into his dungeon, but he’s desperate to resolve the issue with his son.  He offers the PCs exactly enough money to get out of town in exchange for proof of what happened to Anstiss. 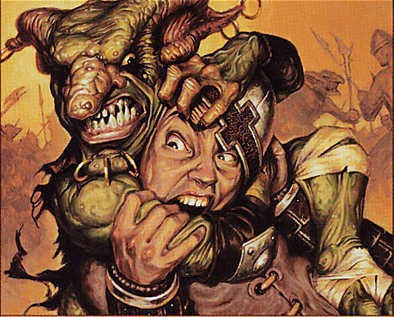 Mutant Tentacle Goblins are identical to regular goblins, save for their arms.  These have been replaced by the tentacles from a Giant Octopus.  This gives them the following melee attack in lieu of their regular attacks:
Tentacles. Melee Weapon Attack: +4 to hit, reach 15’, one target. Hit: 1d6 + 3 bludgeoning damage. If the target is a creature, it is grappled (DC 12to escape). Until the grapple ends, the target is restrained, and the mutant goblin can’t use its tentacles on another target.
The Wolf-Headed Mutant Gobin is mechanically identical to a Gnoll, but it is size Small.
Treasure.  The wolf-headed goblin is carrying 13 ep.  If the party fought the ogre, it has 14 sp and 18 cp.

4.  Outside Malvern Manor.
Malvern Manor is a large country house sitting atop a hill.  As the PCs approach, they can see that the house is covered with webbing.  Several mutant spiders hide in the webbing (DC 17 Perception check to detect the spiders).  Moving through the webs requires a DC 12 Athletics or Acrobatics check.  On an unsuccessful check, PCs are restrained until escape (DC 12 Athletics check).
Lvls 1-2 3 x giant wolf spider
Lvls 3-4 3 x giant spider
These spiders have been magically mutated to allow them to blend chameleon-like with their surroundings.

5.  The Foyer.
The PCs get into the house and find a massive three-headed dog guarding the entrance.  An Insight check (DC 10) reveals that the dog is starving.  Such a check provides Advantage on an Animal Handling check to prevent the dog from attacking (DC 17).
Lvls 1-2 1 x death dog
Lvls 3-4 2 x death dog
These dogs have 3 heads and therefore make 3 Bite attacks per round.

6.  Up the Stairs.
With the death dog subdued, the party realizes that it can hear chains and a soft wordless moaning coming from a room at the top of the stairs.  However, the stairs are ancient and in bad repair.  They collapse when more than 100 lbs. is put on them.  It takes a DC 12 Perception check to recognize the state of the stairs, and a DC 15 Athletics or Acrobatics check to avoid falling when the stairs collapse.  PCs who knew the stairs were dangerous have Advantage to avoid falling during the ascent.
PCs that fall through the stairs take 1d6 bludgeoning damage and are immediately attacked by rats.
Lvls 1-2 2 x giant rats, 1 x rat swarm
Lvls 3-4 6 x giant rats, 2 x rat swarm
The rats attack the PCs as long as they are in the pit created by the stairs’ collapse.  The rats make no effort to pursue once the PCs climb back out again.  Climbing out takes a successful DC 12 Athletics (Climbing) check.  An unsuccessful check results in the PCs being exposed to the rats for an additional round.
The PCs should level-up by the end of this encounter.

7.  Old Man Mordecai.
Once the PCs reach the top of the stairs, they have little trouble finding Old Man Mordecai.  He’s been chained in place in one of the upstairs bedrooms; his tongue has been ripped out, and his fingers have been bitten off.  Like the death dog, Mordecai is starving.  He also appears to have lost his mind. 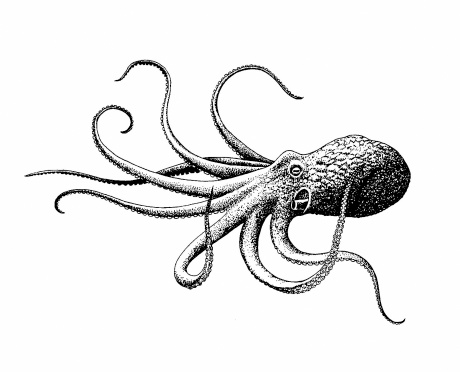 Next to the bed, the party finds a journal filled with Mordecai’s ranting.  The entries begin normally enough, but as time progresses, they become increasingly unhinged.  Mordecai repeatedly refers to an "Apex Animal", and it is only through reading a good bit that the PCs realize he means an octopus.  Mordecai thought the octopus was the world’s "Apex Animal".  He began experimenting with lower life forms, first spiders and then goblins.  But he felt that these weren't strong enough to withstand the trauma of his required "transformations", and finally he seems to have come to some sort of final decision.  His last entry discusses his "ultimate subject," noting that he hopes the gods will have mercy on his soul.
Treasure.  On the side table beside Mordecai’s journal there is a single polished platinum piece and a carved ivory statuette of an octopus worth 50 gp.

8.  Anstiss.
If the party searches the rest of the house, they have little trouble finding the remains of the squad Baron Pavelovitch sent to investigate Anstiss’s disappearance.  The guards’ bodies are cocooned in webbing at the back of the house beyond the back door.  If the party goes outside, they may encounter Wandering Monsters.  There were five guards in the squad, each carrying an average of 5 gp and 20 sp.
Anstiss is hiding in Old Man Mordecai’s laboratory in the manor’s basement.  The basement is a dark, windowless place; its only dim light comes through the door that leads down from the manor’s main level.  Several wrecked tables are scattered around the basement.  The floor is covered by six inches of standing water.  The wrecked tables are difficult terrain.
Lvls 1-2 Anstiss (reskinned grick), 2 x giant toad
Lvls 3-4 Anstiss (reskinned giant scorpion), 3 x grick
It is immediately obvious that Mordecai used Anstiss as his “ultimate subject”.  Like the goblins, Anstiss’s arms have been removed and replaced with giant octopus tentacles.  If the party is Level 4, these are clawed.  If the party is Level 2, they are simply tentacles, albeit big ones.  Anstiss’s mouth has also been replaced by a hideous beak, which is poisonous if the party is Level 4 (Antiss has a Bite attack instead of a Sting attack).  In both cases, Anstiss’s legs have been removed and replaced with the lower body of a giant snake.
Treasure.  Mordecai’s lab is filled with gems that he used as the foci for various spells, along with a collection of magic items that he used in connection with his research into octopi.  A careful search reveals:
·         3 star rose quartz gems
·         2 sardonyx gems
·         4 smoke grey quartz gems
·         2 clear zircons
·         A chrysoprase
These gems are of varying quality and clarity, but on average they are worth 50 gp each.
Mordecai also had the following magic items:
·         Potion of Animal Friendship
·         Scroll of Water Breathing
·         Cloak of the Manta Ray

If the party returns Anstiss’s body to Baron Pavelovitch, the baron pays them 450 gp.

***
Support this Blog
I write these adventures because I like gaming but also as a way to attract interest in this blog and in my writing in general.  My book, Sneakatara Boatman & the Priest of Loki, is out for the Kindle App and on Patreon.  The follow-up, Sneakatara Boatman & the Crown of Pluto, is out as of November 29, 2015.  Both are D&D-style fantasy adventures; they use the same WTF-style plotting that I use in my RPG content.  If you liked any of my RPG stuff, you will probably like my fiction, too.
I’m not asking you to buy anything right now.  However, if you’re looking for something to read on the beach this summer, and you have a tablet, please at least consider checking out some of the Sneax stories.  There are several free ones up on my Patreon page.  If you like those, and you want to support this blog, then buy my book(s).  That is by far the best way to support my writing.
Thanks in advance.
Additional Adventure Articles:
-- The Mystery of Malven Manor (blog post & PDF)
-- The Fall of Cahokiantep (blog post & PDF)
-- The Disappearance of Jaxon Carrows (adventure PDF & AAR blog post)
-- Journey through Crocodile Crossroads (blog post)
-- Story Starter: The Demon’s True Name (blog post & PDF)
-- The Mystery of Mordecai’s Monster (En5ider article, $2)
-- Expanding Mordecai’s Monster (blog post)
-- Zeke's Mine (blog post & PDF)
-- Christmas with the Orcs: The Red Man Comes! (blog post & PDF)