Fall is great for a lot of reasons, but as the season rolls on, things start to cool down in a serious way, and it can become kind of a drag.  Yeah, Thanksgiving is cool, but Christmas is equal parts family day and absolute stress-fest, and living in Coastal Connecticut, both holidays are apt to come with freezing weather--and even the occasional winter storm.  Add in the fact that the sun is now setting at around 4:30 pm, and that college football is nearly over, and bottom line, late fall has a lot less to offer than does the early part of the season.

One of the upsides of the season, though, is the fact that we tend to get some of the year's best beers.  My absolute favorite of these is Sierra Nevada's Estate small-batch, fresh hop seasonal.  I've been wondering for a few weeks now when we'd start seeing it in stores, so you can perhaps imagine my surprise when I saw not "Estate" but "DevESTATEtion," (6.7% ABV) an apparently fresh hop Black IPA seasonal in a bottle that looked like Estate's bottle, but capped with black wax instead of Estate's traditional green.

I step in close and see the following:

If you can't read that, it says, bottom line, that Sierra Nevada lost their entire homegrown barley crop this year, so the year's Estate brew had to be cancelled.  But they still had the hops, so they decided to put out this thing, called "DevESTATEtion," which turns out to be a kind of fresh hop Black IPA.

Fresh hop Black IPA?  What the Hell is that?

Aroma
For what it's worth, the DevESTATEtion smells pretty much like any other fresh hop IPA--like hops that've come straight off the farm.  It's a delicious smell, clean and floral with maybe just a hint of chocolate in the background.

Pour
Looks good.  Maybe three-quarters of an inch of nearly-white head, not as dark or stiff looking as you see in some other Black Ales or Black IPAs but definitely still plenty masculine.


Taste
I'm a sucker for Black IPA's.  If you read the blog a lot, that's not some secret.  You ask me, Black IPA is the future of American brewing. 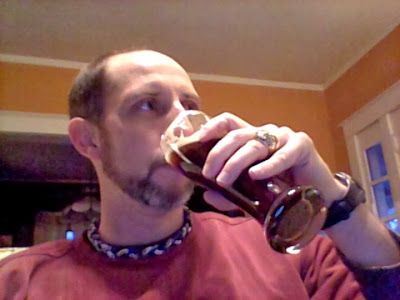 With that said, DevESTATEtion isn't the overwhelming experience that some other Black IPAs are.  It's smooth, definitely similar in style to the typical Estate experience, but stronger, obviously.  Stiffer and stouter because it's a darker beer.  There's a definite hop presence here, but it isn't like being hit in the head with the bitter stick.  For a Black IPA, this is a remarkably well-balanced beer, with a clear malt presence that makes it drinkable, right along with all the flavors that you'd expect in a dark IPA.

I don't know that it's quite made me forget about Sierra Nevada's regular Estate brew, but this is very nice, and it's definitely unique.  I'm enjoying it, and I'm glad that I got the chance to grab it while it's out there.  If you see it in stores, I strongly recommend giving it a try.


***
Correction:
I referred to DevESTATEtion as a "fresh hop" Black IPA.  It is, in fact, a "wet hop" IPA.  The difference (from Sierra Nevada's website) is as follows:

"Wet Hops are un-dried hops, picked and shipped from the growing fields within 24 hours.

Fresh Hops are the freshest dried hops to come from the fields, typically within seven days of harvest.  Over 90% of the world’s hop harvest happens between August 31 and October 31, and these hops are used throughout the calendar year."

DevESTATEtion is an organic ale brewed immediately after harvest using Sierra Nevada's own farm-fresh ingredients, so as you can imagine, the distinction is one that they'd like you to notice.
By Danno E. Cabeza - November 23, 2013