D&D: Christmas with the Orcs

Everyone in our family is required to make a gift for everyone else in our family every year at Christmas.  We do this to combat the ever-growing commercialism of the holiday, and it's been a big hit.  My gift for my kids this year is the following short D&D adventure, which I'm going to run for them on Christmas Eve.  I called it "Christmas with the Orcs: The Red Man Comes!"

***
Christmas with the Orcs: The Red Man Comes! is a short, one-shot holiday-themed adventure for 3rd or 4th level player-characters (PCs) written in the style of Dungeons & Dragons’ 5th Edition. 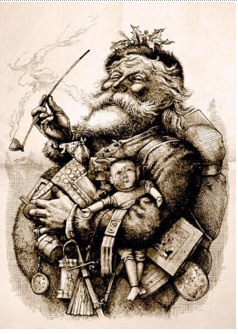 Following a recent revolt against their nefarious trowe masters, the Black Antler tribe of orcs finds itself free for the first time in its history.  Karungus Black Antler, the orc warlord who led the revolt, has declared himself king and surprised the men of the tiny town of Breakwater Bay by suing for peace in the name of the coming Winter Solstice celebration.  Black Antler raids against the town’s outlying farms have long been a problem for the men of Breakwater Bay, but it seems that even orcs can endure only so much war, especially during the holidays.

Karungus’s only condition for peace was that he gain the town’s aid against the legendary creature the orcs call the “Red Man,” an otherworldly being associated with the Winter Solstice whose existence has never been conclusively proven.  Baron Pavel, ruler of Breakwater Bay, dispatched the party to aid the Black Antlers with instructions to preserve the peace at any cost.

GM Notes:
-- This adventure probably runs a little better for 4th Level PCs than 3rd.
-- I should have used Yeti somewhere in here just to stay on theme.  If you want to fix that, replace two of the Centaurs in Encounter 2 with a single Yeti.  I will probably do that when I run this for my kids.

Questions?  Drop them below!


I write these adventures because I like gaming but also as a way to attract interest in this blog and in my writing in general.  My book, Sneakatara Boatman & the Priest of Loki, is out for the Kindle App and on Patreon.  The follow-up, Sneakatara Boatman & the Crown of Pluto, is out as of November 29, 2015.  Both are D&D-style fantasy adventures; they use the same WTF-style plotting that I use in my RPG content.  If you liked any of my RPG stuff, you will probably like my fiction, too.
I’m not asking you to buy anything right now.  However, if you’re looking for something to read on the beach this summer, and you have a tablet, please at least consider checking out some of the Sneax stories.  There are several free ones up on my Patreon page.  If you like those, and you want to support this blog, then buy my book(s).  That is by far the best way to support my writing.
Thanks in advance.
Additional Adventure Articles
-- The Mystery of Malven Manor (blog post & PDF)
-- The Fall of Cahokiantep (blog post & PDF)
-- The Disappearance of Jaxon Carrows (adventure PDF & AAR blog post)
-- Journey through Crocodile Crossroads (blog post)
-- Story Starter: The Demon’s True Name (blog post & PDF)
-- The Mystery of Mordecai’s Monster (En5ider article, $2)
-- Expanding Mordecai’s Monster (blog post)
-- Zeke's Mine (blog post & PDF)
-- Christmas with the Orcs: The Red Man Comes! (blog post & PDF)
By Danno E. Cabeza - December 10, 2015