Welcome to week three of the Sneax & Elaina Emboo experiment.  Last week continued to draw readers, so we'll keep it going and hope for the best.

Our Story So Far:
Sneakatara Boatman was abandoned as a child by parents she never knew.  She grew up at the orphanage within Apollo's temple down in Wanderhaven's Docks District.  It was a tough life for a tiny girl with few ways to defend herself, and she lit out as soon as she was able.  But life on the streets is no safer than it was back in the orphanage, and now the loathsome street criminal Russitan Lassiter has Sneax at his mercy.

Elaina Emboo is a rich girl from a nice family, but her controlling father has her entire life mapped out already.  Elaina envies Sneax's freedom without truly understanding its cost.  Still, she agree to help when Sneax asks her to head up to the old church to meet with Lassiter. 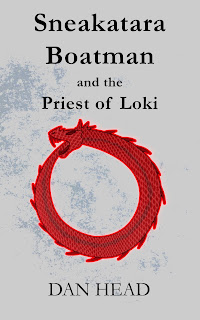 Sneax didn’t hear the rest because she clapped her hand over Elaina’s mouth.  “Do you see that?!”
***


Want to know what happens next?

You don't have to wait.  This book and its sequel are both out now for your Kindle or the Kindle App on your iPad or Android tablet.