I didn't like last night's game as much as the score might indicate.  Rice has an inept offense, but the game itself would have been a much closer game had Rice been able to just hang on to the football with its running backs.  Clearly Rice needs a quarterback.  They're no better passing than Army is, and with that, they really don't have much in sustainable scoring offense.  But Army still let them put up 200 yards rushing and 5.4 yards/carry, and that's not a great sign despite all the strip-fumbles, sacks, and the pick-six for S Max Regan.

Part of this was no doubt because the Army defense was on the field a lot in the first half.  Army's offense was slow to get going last night, punting on their first possession and struggling with the Fullback Dive all night.  Rice has a decent running defense, and they were stout most of the night in the middle of the field.  They have good D-Tackles.  The game broke open because of Regan's interception, though, and from there, the Owls' sloppy play put them deep in a hole.  But when you score like that on defense and continually give your offense a short field, it means that your defense is gonna be out there a lot, too.  Army forced some punts, but there were also quite a few would-be disastrously long running plays that ended as stripped balls.  Granted, that's better than allowing rushing touchdowns and sustained drives, but Army still has some work to do to stop teams from running the football on them.


From what I heard, Army fans outnumbered Rice fans last night, making this something like an Army home game.  A couple of friends sent me pictures.  It looked like a fun night. 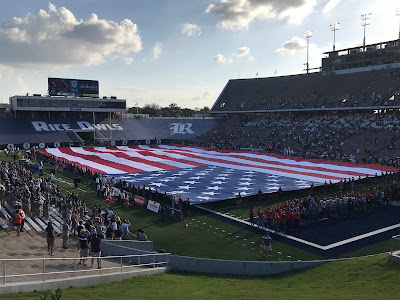 The final thing I'll say is that I thought the offense did a good job getting the ball out to the slotbacks in space when the middle closed up on the Fullback Dive.  SB Kell Walker and QB Ahmad Bradshaw both went over 100 yards last night, mostly outside, and Army as a whole put up a whopping 418 yards rushing.  That will do wonders for your stats.

It was good to see the backups get some reps out there last night as well.  QB Kelvin Hopkins looks really good running the offense.  I don't necessarily want to see Army in a position where it has to pass repeatedly, but I'd like to see Hopkins get some reps with the starters, just to see how he would run things.  I get the sense that his version of the triple-option would involve a lot more quick outs to the receivers, like we saw from Chris Carter in previous years.  The plebe slotbacks that Hopkins works with all have mad talent, but his reserve O-Linemen still need some work.  With that, we haven't seen Hopkins play to his potential yet.

We're back home next week to face a very talented Eastern Michigan team.  I've said since before the season started that I thought this week's game would be one of the most exciting of the season, and I'm sticking to that.  Army will absolutely need its best stuff to get a win at home against an Eagles team with a senior quarterback coming off a strong bowl performance last season.