5 Things on a Friday: Did I Mention That It Snowed?

1. Nike’s huge new flagship looks like the future of retail (Fast Company)
But there is a catch. For all these conveniences to work, you have to be a Nike member (which is free), have the Nike app, and allow it to track your location. That’s because the company wants the app to be able to recognize you the second you walk into a store and send you notifications when you’re nearby.
That’s a lot of access to give a sneaker company about your whereabouts. A few days after I’d set up my account, my iPhone sent me a follow-up reminder that Nike was still constantly tracking my location, and verifying that was something I really wanted. Now that I’ve experienced the store, I’ll be adjusting my settings so that Nike only gets access to my location when I open the app.
I’ll agree with Fast Company that this is the future.  There are a couple of stores doing projects like this, including Kohls and Amazon.  I expect it’s going to work, but privacy is dead.
2. The Best of Stan Lee’s Marvel Comic Books (Wired)
Amazing Spider-Man (Vol. 1) #1-100
The other essential Stan Lee work, Amazing Spider-Man, sees Stan Lee (and Steve Ditko and John Romita) perfect the Marvel formula when it comes to soap opera and melodrama; everything about the series’ first 100 issues manages to make the personal drama of one increasingly-less-nerdy teenager feel like the most important story of the world, in part because it sometimes is. The roots of all kinds of pop culture can be traced back to these comics, which remain as off-kilter, funny, and thrilling today as they did when they were created half a century ago. 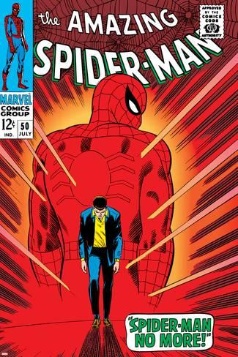 Yes, this stuff is great.  But also: it’s kind of a cop-out to point at a hundred issue run (!) as a single work.  I mean, yeah, the way they develop Peter Parker in juxtaposition to Flash Thompson is amazing.  But I might’ve pointed to The Death of Gwen Stacy or Spider-Man No More as early series’ high points.
3. Stan Lee Was Many Wonderful Things—So Please Stop Calling Him “Creator” of Marvel (Slate)
Fortunately, there are plenty of ways to describe Lee that accurately reflect his monumental impact on comics and pop culture. In addition to being a co-creator of Marvel, he was the longtime editor—a job far less sexy than writer or artist, but kind of important to making sure the damn comics came out at all. As Marvel editor-in-chief, Lee shepherded a marginal comics company from the bottom of the stack to the top of the sales charts, eventually smashing stodgy DC and revolutionizing comics. Many folks (such as myself) are obsessed with the artistic genius of Lee’s collaborators. Their impact might have been much less if Lee hadn’t been such a successful and skilled editor.
I hate the way guys hate on Lee’s role at Marvel during the early years.  Folks are always going on about Kirby or Ditko, and those guys did a lot of genius stuff, but please.  It’s not some accident that the monumentally most successful work either man did—ever—was in cooperation with Stan Lee.
Pop quiz: What do all of Lee’s co-creators have in common?
That’s right.  They have Stan Lee in common.  It’s the stuff they did with Lee in Marvel’s early years that changed the world and therefore remains in print even today.
4. College football bowl projections: Florida's comeback pushes Gators into New Year's Six fray (CBS Sports)
The Knights beat Navy in a closer game than expected, but that is not the bad news. The bad news is that the AAC West division continues to cannibalize itself. Houston lost again, this time to Temple.  The Cougars now have three losses, which is still two fewer than anyone else, but they have dropped into a three-way tie for first in the division with SMU and Tulane.  If Memphis wins out over Houston and SMU and the Cougars beat Tulane, the AAC West could end in a four-way tie.
Lotta folks saying UCF is gonna wind up in a New Year's’ Six against Florida.  Not a bad matchup, and it’d be for the Florida Heavyweight Championship Belt.
CBS Sports: SMU vs. Army (Armed Forces Bowl)
Yahoo! Sports: Army vs. Cincinnati (Birmingham Bowl)
SB*Nation: SMU vs. Army (Armed Forces Bowl)
Sports Illustrated: Army vs. Cal (Cheez-It Bowl, Phoenix)
Athlon Sports: Houston vs. Army (Armed Forces Bowl)
ESPN (Bonagura): Utah State vs. Army (Armed Forces Bowl)
ESPN (Sherman): Oregon State vs. Army (Redbox Bowl [previously the San Francisco Bowl])


Nobody got it right, unfortunately.  The real matchup will be Army vs. Tennessee in the Independence Bowl on December 27th.  In this scenario, Army takes an ACC slot, with Clemson and Notre Dame in the College Football Playoff and Syracuse in a New Year’s Six Bowl.  That leaves the ACC with something like ten more bowl slots, and they won’t have enough eligible teams.
It’s maybe worth mentioning that the Armed Forces Bowl pits the Big 12 vs. the American Conference, and the Big 12 also looks unlikely to fill all of its slots.  A matchup with an AAC opponent in Houston or Temple is therefore a not unreasonable prediction, all things considered.
5. Army Football / AFF / Writing Update
My personal writing schedule has gotten completely out of control.  I can barely keep up with it, so I can only imagine what it looks like from the outside.  Basically, I am always writing something.
Anyway, here’s what we had this week:


Did anybody read/listen to/watch all of this?  I’d really like to know.
Some additional headlines:
1. Tuesday Takeaways: Colgate Week (Army Football Insider)
C Bryce Holland and SB Kell Walker are both expected to start on Saturday.
2. Via SB*Nation:


Army (vs FCS Lafayette) only had six offensive possessions on Saturday. They scored on each of the first five, and ran out the clock with a 14-play, 59-yard, 9 minute, 33 second drive to end the game on their sixth.
— Brian Fremeau (@bcfremeau) November 12, 2018

FCS football rankings: Colgate rises, Elon drops in new Coaches’ Poll (NCAA.Com)
Colgate… is a perfect 9-0 and jumped two spots to No. 6. Colgate plays Army this week in what’s going to be a significant test, because lately, the Raiders haven’t been tested at all. They’ve given up six points in their last four games and have smoked everyone in their path, except for Holy Cross in Week 1. Colgate could make its way into the top five with a win over the FBS' Army on Saturday.
3. The Zone-Read Triple-Option.
This has nothing to do with Army Football, but it’s really cool.

Zone triple option. Option football is alive and well for most spread teams but it looks different from Navy/Army. Oline blocks inside zone right with the fullback doing a slip block on the backside linebacker and the #2 receiver coming in deep motion to be the pitch man. The DE is unblocked and is the first read, if he flies up the field or sits the QB will give the ball to the RB. If he squeezes down the LOS like in the example above the QB pulls and works downhill to the safety. The safety is the pitch key and he works hard to the outside to set the edge and take away the pitch so the QB tucks the ball and runs downhill for a touchdown
A post shared by @ coachkenny_ on Feb 1, 2018 at 2:32pm PST

That’s all I’ve got.  Enjoy the weekend.