The Mermaid: A PC Race Design for D&D

We have a rule at our house.  Everyone in our family has to make a Christmas gift for everyone else in the family.  My daughter Hannah has been clamoring to play D&D as a mermaid for months now, so this design for a Mermaid Player-Character race was my made-gift to her.

It's pretty simple, but she was delighted with it, immediately launching into a deep discussion of the four sub-races of mermaids--arctic, tropical, river, and deep--and their shared history, theology, and lineage.

We may publish an update with the four sub-races.  Who knows?


Mermaids: A Playable PC Race for D&D
This link is to a two-page downloadable PDF via Google Drive.  It looks mostly like this:


Mermaids: A Playable PC Race for D&D
Go into any seaside shanty tavern, and you’ll hear tales of mermaids, the beautiful but sometimes deadly sirens of the sea.  But though legends of merfolk have spread far and wide across the Realms, reality is that few sailors ever actually see a mermaid, much less meet one.  Merfolk are a rare and often shy people. 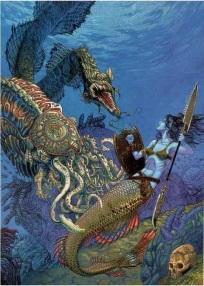 Beautiful Curiosities
Merfolk tend to be private and even insular by nature, though a select few may occasionally become curious or even obsessed with the World Above.  While legend has it that mermaids enjoy using their songs to lure sailors to their deaths, the truth is not quite so clear cut.  In fact, most merfolk live in fear of surface dwellers and desire only to be left alone.  To one of the Mer, the surface can be a Hellscape of unrelenting light and heat and of sharp hooks and dangerous predators.  Though many merfolk enjoy basking in the sun on warm spring days, this is known among their people to be a daring and even dangerous pastime.  Similarly, though some few merfolk do indeed take delight in the misfortunes of surface sailors, few will actually risk the surface to lead ships and men to their doom.
Still, sailors account themselves lucky when they spy a mermaid.  The Mer are uniformly beautiful and widely possessed of the most wondrous voices.  It’s rare but not impossible to hear them singing on the rocks near outlying coastal communities.
All merfolk have upper bodies similar to those of humans, and most have lower bodies like those of large fish.  However, some few may have lower bodies of different kinds, such as sharks, giant octopi, or even jellyfish.
Surface Scouts
Because the surface world presents a potentially overwhelming danger to merfolk, Mer elders will occasionally send scouts into the World Above to spy on humanity and the other surface races.  Such spies require special Soul Talismans, rare but well-known magic among merfolk, to transform their tails into bipedal legs.  Once transformed, a mermaid may appear as either a human or a sea elf, depending upon her desire.  Merfolk scouts in human form may have a slightly blue or green tint to their skin or hair.
Mermaid Weapons and Armor
Merfolk disdain slashing and bludgeoning weapons because such weapons are difficult to use underwater.  Similarly, most merfolk will not wear mundane metal armor or carry metal weapons because such weapons tend to corrode or rust quickly in the sea.  Even most magical weapons and armor typically prove no match for the harsh conditions of underwater life.
Instead, merfolk warriors tend to prefer the spear, the trident, the net, and the pike (polearm).  They generally wear shark hide or natural scalemail armor of various kinds, and they prize armor that has been made from the scales of a hydra, bronze or black dragon, or similar apex aquatic predator.  Merfolk also prize mithral weapons and armor because they are both lightweight and highly resistant to corrosion.
Reproduction

Mermaids can reproduce with both other merfolk and with surface dwellers according to the form they hold at the time.  The offspring of the union between a Mer and a surface dweller is called asylph.  Sylphs appear broadly similar to the surface parent, though they are often paler than typical, and they often have a slightly blue-green tint to their skin.
Slyphs are statistically similar to half-elves, but they are naturally amphibious where half-elves are born of Fey Ancestory.  Sylphs also possess a natural Swim Speed of 20 feet.  Sylphs substitute Aquan for Elvish in their language proficiencies.
Mermaid Traits
As a mermaid, you have certain traits in common with your people.
Ability Score Increase. Your Charisma score increases by 2, and either your Wisdom or your Dexterity increase by 1.
Age. Mermaids age at the same rate as humans.
Alignment. Mermaids can be either good or evil; they are rarely neutral. Some mermaids view the surface world as an imminent threat and surface-dwelling sailors as uninvited interlopers in a world in which they do not belong.
Size. Mermaids are Medium creatures.  With their tales fully extended, they may get up to 7 feet long.  They vary in weight.  Male merfolk warriors can go as large as 200 pounds.
Speed. Merfolk have a base swimming speed of 35 feet. Without the use of a Soul Talisman, however, they are nearly immobile on land.  They can slide up to 10 feet but treat dry ground as difficult terrain.  Merfolk in human form have a swim speed of 20 feet.
Amphibious.  Merfolk can breathe freely in the air and underwater.
Language. Mermaids can read, write, and speak Aquan and Common.
Low-light Vision. Mermaids have low-light vision out to 60 feet.
Innate magic.  You know the Friends cantrip.  When you reach 3rd level, you can cast Charm Person as a 1st level spell once per long rest.  Charisma is your spellcasting ability for these spells.  Additionally, all mermaid spell casters add Shape Water, Speak with Animals, Tidal Wave, and Watery Sphere to their class spell lists.
Mermaid Weapons Training. The net, spear, and trident are considered simple weapons for you, and you can use a half-length spear as a finesse weapon.  Such a spear deals 1d6 piercing damage and loses the thrown property.

Errata. The following does not appear in the original write-up but probably should.

1. A mermaid who is unexpectedly submerged in water must succeed on a DC 10 Concentration check or immediately, involuntarily revert to her native form.  Such a reversion uses her Reaction.