I'm Getting Sick of Snow

This Winter Wonderland can kiss my ass.  Seriously. Six to eight inches Monday, followed by something like four this morning, which is supposed to turn into freezing rain midday. Ugh. I've seen predictions calling for up to a half-inch of icing on top of all the snow, which is going to turn the greater NYC area into something like what Atlanta was two weeks ago, except with scattered power outages at the distribution level on top of everything else.

I've been living up here for a long time. Four years at the Academy, then I lived in Boston for a few months right after I left the Army and in Hartford for a while after that. That was also winter, but it was nothing like this. Then I moved to Hoboken and my current job in August 2001, so it's been what?  Twelve-and-a-half years in and around New York?  That's a lot of winters. Seen several blizzards, including last year's Snowpocalpse that dumped fully three feet on my little town of Stratford.  A few years before that, we had six major snowstorms in one year and thought it was a lot.

But this winter has been a whole 'nother level. In addition to the freezing temperatures from the Polar Vortex, this is at least the fifth snowstorm this year, second this week, and we may yet get one more before the week is out. What the Hell is going on? 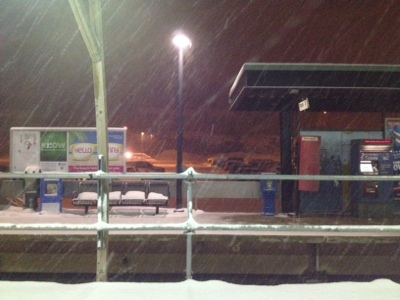 Ah well, what can you do?

Email ThisBlogThis!Share to TwitterShare to FacebookShare to Pinterest
Labels: snow