D&D: Anatomy of a Sea Story

I’ve had in mind to do an adventure at sea for quite some time.  I like sea stories, and I choose to live near Long Island Sound.  I’ve read all of the Aubrey-Maturin (Master and Commander) books and most of the Honor Harrington books, and I set a good portion of my own forthcoming book, Sneakatara Boatman & the Crown of Pluto, on board a fifteenth century caravel very like the ones with which Christopher Columbus sailed across the Atlantic in 1492.  I’m even thinking seriously about trying to swim solo across Long Island Sound from Port Jefferson, NY, to Bridgeport, CT.  In thinking about my would-be sea story, though, it occurred to me that I wasn’t sure what elements actually make up the sea story genre.  Is the sea story a thing unto itself, or is it just as adventure story set on board a boat or a ship?  What elements tie stories like Moby Dick, Billy Bud, 20,000 Leagues Under the Sea, and The Far Side of the World together? 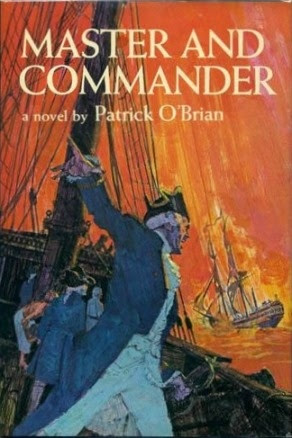 Writing interesting fiction is often a matter of managing readers’ expectations.  Myths feel like myths because they mostly follow Monomyth structure.  Similarly, Hollywood blockbusters often feel familiar on first viewing because they follow the story structure laid out in a book called Save the Cat.  The same can be said for many other types of stories.  As consumers of media, we’re conditioned to expect certain structures in our fiction, and as writers and storytellers, we therefore have both an opportunity and an obligation to know ahead of time what our audience expects.  How we use or subvert expectations can have a profound impact on the way our readers perceive the story we’re trying to tell.
This has to do with D&D because so much of the game’s inherent story structure—its adventure structure—is intentionally designed to mimic fiction.  We don’t have time in actual play to necessarily describe everything in great detail, and even if we could, no one would want that.  D&D is a game of exploration, but it’s also a game of action.  Moreover, role playing games are necessarily free form.  Players like them because anything can happen.  That’s the good part, sure.  But it also makes writing for role playing games a challenge.  Because the game is so potentially free flowing, we—as DMs, writers, what-have-you—have a requirement to closely follow, or to at least pay attention to, the expectations of genre.
To put it another way: you can set a standard D&D adventure on a boat, but it won’t necessarily feel to your players like they’re working their way through Moby Dick or 20,000 Leagues Under the Sea unless you also meet their expectations of genre.  Since the players themselves are liable to do literally anything, the conventions of genre might very well be the only thing holding your adventure together thematically.  This makes convention an important part of the adventure planning process.
I do a lot of brainstorming when I write.  In putting together my sea story adventure, I therefore started by thinking about a bunch of existing sea stories and their thematic elements.  I came up with the following list, by which I hoped to answer the questions posed in the first paragraph.  What makes a sea story?  My answers are below.

Common Themes in Sea Stories
Obsession.  Perhaps the most consistent element in a sea story.  Nemo is obsessed with revenge in 20,000 Leagues, Ahab is obsessed with the whale in Moby Dick, and even Captain Hook shows a bit of obsession over that stupid alligator in Peter Pan.  All things considered, I’m honestly not sure it’s a sea story if the captain’s not insanely obsessed with achieving his ultimate goal.
Revenge.  It’s the kind of thing that can make a man obsess and drive a quest for many, many years.
Shipwreck.  The Far Side of the World and 20,000 Leagues both feature shipwrecks.  Plus, shipwrecks are an ideal disaster from which the heroes can recover to achieve greatness.
Weird Monsters & Sea Creatures.  This goes along with the exploration side of the genre.  A sea story always involves incredible, often incredibly dangerous, giant predators of the sea.
A favored of the gods falls from favor.  Here I’m thinking of Billy Bud, The Rhyme of the Ancient Mariner, 20,000 Leagues, and even The Odyssey.  “He whom the gods would destroy, they first make proud.”
The unknown.  It’s fair to say that a journey into the unknown is a staple of the adventure story in general and of sea stories in particular.  The idea of sailing into the great unknown is one of mankind’s most iconic ideas, and it’s a staple of fiction.  20,000 Leagues, Voyage of the Dawn Treader, The Odyssey, and even The Fantastic Voyage feature journeys into the unknown as quintessential plot devices.
The undiscovered country.  Similar to the above, but here I’m thinking of a specific destination.  The lost city of Atlantis or Ariel’s kingdom in The Little Mermaid or the Nautilus in 20,000 Leagues.   Even the James Bond film The Spy Who Loved Me hits its marks as a sea story when it travels down into the villain’s undersea lair.
The effects of power and social hierarchy.  This is a critical element.  The captain of a ship is the living embodiment of God.  This can have very real effects on the men at his command, and these effects are often explored as a staple of the genre.  Or imagine the movie Titanic without its sense of social hierarchy.  It wouldn’t make sense.  What makes that story work is the fact that the ship itself is an enclosed system in which every character has a clearly defined sense of self and place.
That list above gave me some ideas.  Those are potential themes.  Obsession and a trip into the unknown struck me as particularly useful in the context of a D&D campaign, with the idea of developing a social hierarchy serving as an interesting but challenging element to use if the opportunity arises.  This by itself was hardly enough to get me writing, though.  I therefore started brainstorming plot ideas, keeping in mind that I wanted ideas that let me make use of at least some of the thematic elements listed above.

Potential Story Ideas
Undersea Treasure.  That’s an obvious one for a D&D campaign.  It’s also an obvious point on which to build an obsession.
Sailors go missing from Breakwater Bay.  I’m not sure where I’m going to set this story, but for planning purposes, it makes sense to put it somewhere in Wanderhaven.  Lots of folks liked “The Mystery of Malvern Manor,” so building it as a potential sequel makes some sense from a planning stand point.  I can always change that later.
A mysterious ship appears off the coast.  There are lot of ways to play it from here.  In concept, I’m remembering a favorite episode of Scooby Doo.
A killer whirlpool appears off the coast.  I’m specifically thinking here of recycling the plot from The Fantastic Voyage.  In the movie, the heroes have to shrink down to cut out a clot from a scientist’s brain.  We could build a D&D campaign around the same idea, using some kind of natural disaster in lieu of the clot and the undiscovered world under the sea in lieu of the human body.
Pirate raiders attack the town, and the party sails off to get revenge.  I don’t love this plot because it’s more like a Western set at sea, but it would be easy to use it to build a dungeon crawl.
Chase the giant sea monster.  Moby Dick, obviously.  We probably need to add an element of revenge, though, or maybe some hidden treasure to drive the plot.
More of Malvern’s monsters.  Old Man Malvern was experimenting on octopi and spiders.  Some of his creations could easily have escaped into the sea, where they bred and created a new crisis along the coasts.
Undersea monsters attack the town.  This is like the pirate plot, but it involves sahaguin or something like them.  I dislike this plot because on its face, it uses familiar D&D elements in a familiar way.
Unbeknownst to the World Above, there was once a great king of the sea, but that king has disappeared.  Think Dominion but for sea elves and merfolk.
The sea elves are missing.  Which begs the question: do the local fishermen even know that sea elves were living next door?
There’s an undersea lich.  I’m still thinking of Scooby Doo.  This lich is probably on the ghost ship.
The King’s Navy comes to town following a famous victory over the local pirate band.  In the course of victory, they accidentally unleashed something horrible.
Impressed onto a warship, the PCs must fight to survive.  An interesting plot, but difficult to make it work in a D&D game, I think.  Has the benefit of playing directly off of social hierarchy, though.
I’m clearly not going to use all of these.  The trick is to pick the ones you like and work them together into a story that makes sense and—maybe—surprises your audience.  I find lists like this helpful in terms of putting together overarching ideas for stories, and in conjunction with my list of themes, we can begin developing a storytelling approach.  That’s good.
It’s still not a story, though.  For that, we need plot points.  Eighty percent of our story ought to be development.  In other words, we need for things to go wrong.  We need obstacles our heroes can overcome.  That’s how we know that they’re heroes.

Potential Developments
Whirlpool / Elemental Rift.  Whether we use the whirlpool as a fundamental plot point or just as a short-term obstacle, it’s a staple of the genre.  Besides, elemental rifts are all the rage in D&D these days, and referencing The Fantastic Voyage in a vague way appeals to me on a personal level.
Sea elves enclave.  As discussed above.  Part of our journey into the unknown requires a destination.  One possible destination is an undersea city, complete with inhuman inhabitants and otherworldly architecture.
Mermen, kuo-toa, etc.  These can either be random raiders encountered in traveling or a whole civilization hidden under the sea.  In any case, this isn’t a destination, it’s a hostile group acting in ways opposed to the party’s best interests.  These guys are an obstacle or complication.
Shipwreck.  As above, this is either a central plot point, a planned obstacle to be overcome, or a potential result of a failed skills challenge.
Pirates.  Like the mermen, these are either a short-term obstacle, or they’re central to the plot, and we’re trying to find their lair.
Sirens.  Seductresses of the sea, whose purpose is to drag our heroes off course.
Sea Monsters.  A necessity.  Are these the point of the adventure or just something to up the stakes at a critical moment?  Is this a sea dragon protecting its lair, or a mindless kraken feeding on those unlucky enough to be nearby?
Mutiny.  If we’re going to try to explore human hierarchies, it’s worth thinking about what happens when the hierarchy goes wrong.

This is enough to get me started.  From here, I spent some time narrowing down my ideas and developed the bones of an actual plot.  I still need a goal, but now I can at least see how the possibilities shake out.  Some are obvious—and obviously emblematic of the genre.  Others will hopefully play against if I play them right.  In any event, there were a bunch that I could have used.
I’m curious, though.  Looking at this list, what would you do to build a sea story?  Did I leave anything out that’s clearly a staple of the genre?
By Danno E. Cabeza - August 11, 2015