The old 1980s-era Dungeons & Dragons cartoon from Marvel Studios has been getting some love on Twitter this week, with guys like Nathan Stewart, Senior Director of Dungeons & Dragons, seemingly paying some attention.  This blog has done almost nothing but football for the last several weeks, so in the interest of both content diversity and helping to press for a quality D&D cartoon reboot, let’s talk about what a new show might potentially look like.


The old D&D cartoon was a classic of 80s-style action-adventure.  Six kids from Earth get on a D&D-themed rollercoaster and accidentally travel through an interdimensional portal, only to wind up in the Forgotten Realms.  They then take on some classic—and not so classic—character archetypes, and adventure ensues.
To recap, our heroes included:

Dungeons and Dragons was great because it stayed generally true to the spirit of the game while remaining mostly kid-friendly as well.  Our teenage protagonists faced legitimate life-and-death challenges week after week, but no one ever died, nor did we deal with the inevitable adolescent urges that would attend a CW version of this same show in the modern era.  I was able to show it to my own kids a few years ago via the DVD box set during a family trip to Maine, to the delight of the entire family.

That's cool too. But, as a parent, i have endless adult stuff my kids can't watch.
— Alphastream (@Alphastream) September 19, 2017

We (animators) talk about this every 3 months or so.

Do you hear that @Wizards_DnD ?
The cartoonists are primed!

Regular readers of this blog will already know that I play D&D with my kids whenever the opportunity presents itself.  Watching the show with them was cool for similar reasons, but it involved markedly less work for me.  That didn’t suck.
Where Are We Now?
In thinking about how to set up a new series, one has to consider how the old series ended.  Wikipedia reports that Marvel made twenty-seven episodes over the course of a three year run, with a planned twenty-eighth episode scripted but never produced.  The vast majority of these episodes chronicled the kids’ attempts to escape the Realms via riddled clues from their guide Dungeon Master, with a monster-of-the-week format in which they righted the Forgotten Realms’ wrongs but never quite succeeded in escaping back to Earth.  Mostly, they were blocked by Venger, an evil sorcerer who served as the show’s Darth Vader.  Venger sought the kids’ magic weapons as a means of augmenting his own already considerable magic. 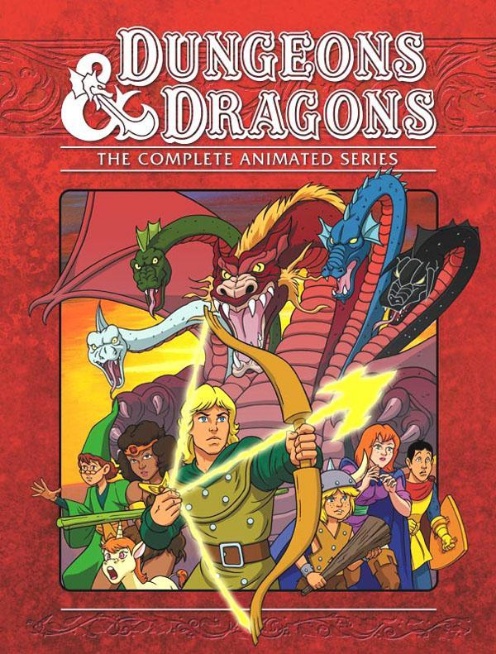 The show’s final episode was The Dragon’s Graveyard, in which the kids contemplate killing Venger, whom they see as their primary obstacle to getting home, with the help of the dragon god Tiamat.  The kids succeed in luring Venger to an extra-dimensional dragon’s graveyard and even manage to defeat him, but at the last second Hank decides to let him live.  Dungeon Master then appears to tell them that they’ve “taken their first steps home.”  By this point, though, it has become all too apparent that Dungeon Master has himself been using the kids for his own ends during the entirety of the show.
Had a fourth season been ordered, series writer Michael Reaves has said that it would have seen the kids grow in their abilities while becoming less reliant on the power of their weapons.  This mirrors the structure of D&D, the game, in the sense that the characters would have leveled-up and become more powerful and versatile, and it makes sense in terms of character development as well.  Team leader Hank is sixteen when the show starts.  A fourth season would’ve seen him mature to age nineteen, making him a grown-ass man in the context of the Forgotten Realms.  Even Sheila, thirteen at the show’s premier, would’ve been sixteen by the start of a potential fourth season.
Think about where Sansa Stark is by age sixteen.  It’s hard to imagine a girl like that going back to high school after four years fighting dragons.
Nevertheless, we know that some of the kids do make it back.  In The Girl Who Dreamed Tomorrow, we see Bobby fall in love with Terri, a girl from Earth who dreams the future.  She foretells their meeting back at school in the episode’s closing scene, and her dreams to that point had always come true.  Moreover, Presto and Eric both hate being in the Realms.  It’s not hard to imagine someone like Hank or Diana making peace with Realms life, but Eric in particular seems unlikely ever to stop looking for a way back to Earth.
Closing the Circle
My idea for a reboot starts with the conceit that not all of the kids make it back.  I would set a bridge episode in the Underdark, with the kids closer than ever to finding their fabled portal back to Earth.  But they’re being pursued by dark elves in the service of Venger, and things get hairy.  They have to cross a tiny rock bridge that spans a seemingly bottomless chasm, but the portal’s on the other side.  They can see it.  Hank lays down covering fire while the group crosses the bridge, but now he can’t get across.  The dark elves have moved into flanking positions above and below the bridge.  Diana vaults back across the chasm as drow infantry close on Hank, and she’s able to buy some time with her magic staff, but it’s clear that she and Hank are not going to make it.
Hank calls out to Eric, who is understandably reluctant to cross the bridge again, especially with drow snipers all around them.  But Hank is the team leader.  He convinces Eric that with the combined power of his shield and Hank’s bow, they’ll get back across and go home.  Eric steps out onto the bridge, blocks one arrow and then another, but then he loses his balance.  He tumbles into the chasm while the team watches helplessly.  Everyone freaks, and Hank realizes that this is it.  If he doesn’t get what’s left of his team out now, there’s not going to be another opportunity.
Hank tells Sheila to get Bobby and Presto and go on through the portal.  She does, though reluctantly, and she has to drag Presto, who wants to go after Eric.  This leaves Hank and Diana by themselves.  They’re going to have to make a break for it.  But Hank isn’t planning to go.  He too wants to go after Eric.  He tells Diana to follow him and then dashes across the bridge, firing wildly.  But the bridge explodes while he’s on it, and like Eric, he tumbles into the darkness.  Diana beats down some drow with her staff, buys a bit of space, and then vaults across to the portal, but now she doesn’t want to go, either.  She keeps looking down into the darkness, wondering if either of her friends might possibly have survived.
It’s irrelevant.
The drow are everywhere.  Even if Hank and Eric survived, Diana will never reach them.  With the drow closing in, she can either escapes to Earth now or get herself captured.   There’s no third option.  She steps through the portal just as it collapses and finds her friends waiting for her.  But when Sheila asks where Hank is, Diana can only shake her head.
Thirty years pass.
Presto and Sheila have gotten married.  They have two kids, a smart, shy boy and an outgoing, energetic girl.  Sheila is a housewife.  Presto teaches high school physics.  Bobby has long since moved to California, where he works as an anger management counsellor.  They’re all still friends with Diana, now a successful corporate lawyer with a daughter of her own, Carrie, a talented high school gymnast like her mother once was.  But it doesn’t take much to get Presto talking bad about Hank.  His kids have grown up knowing that Hank is the one who got their father’s best friend killed—and for nothing.
Thankfully, there’s no time to talk about that now.  The fair is in town, and the kids all want to go.  This includes Diana’s daughter’s boyfriend Brandon, captain of the JV football team.
At the fair, the adults remember the old Dungeons and Dragons ride, while the kids go off on their own and find… the Dungeons and Dragons ride.  The kids are on the ride before the adults realize the danger.  The adults then watch helplessly as the cycle starts all over again.  But this time there are only four kids on the ride.

Do not expect @Wizards_DnD to do a thing. They gave Tiamat a book deal, but they snub the true power in the Realm! Fools!
— Venger (@theRealVenger) September 18, 2017

Back in the Realms, Lord Eric the Cavalier is in his castle when the kids arrive.  He hears Tiamat shriek, catches a glimpse of Venger’s magic, and knows immediately what’s just happened.  Moreover, the sight of a black girl using Diana’s staff is unmistakable, as is Sheila’s daughter, now wielding Bobby’s old club against Tiamat.  Eric rushes out brandishing his shield, much to the surprise—and pique—of Venger.  Between Tiamat and the kids’ arrival with the fabled magic weapons, Venger is forced to flee, though he does so with the cryptic words, “We will discuss again, Cavalier.  Best you consider your situation carefully before we do.”
Presto’s kids recognize Eric and his shield.  They are beyond astonished to find that he is alive.  Eric takes the kids back to the castle and out to an old graveyard, where they find Hank’s grave, a half-drow boy carrying Hank’s bow, and a tiefling girl.  The boy, Kaladin, turns out to be Hank’s son.  The girl, Jasnah1, is Eric’s ward.  Hank and Eric both made it out of the Underdark, it seems, though not without some trials and tribulations.
Eric, we will eventually learn, has bent the knee to Venger.  He didn’t have any choice.  Hank has been dead a long time, and no one has seen Dungeon Master since the party broke up more than thirty years ago.  As part of the bargain, Venger left his daughter Jasnah with Eric, ostensibly as a hostage to ensure Venger’s good behavior.  In practice, Jasnah’s presence serves only to tie Eric closer to the Realms’ dark lord.  It’s not like Eric would ever harm the girl, nor can he afford to go on crazy adventures when he has a daughter to care for.  Ultimately, the girl’s presence leaves Eric with little choice but to administer a small piece of the Realms as Venger’s vassal, though he tries to be the best leader that he can be for the people in his care.
Regardless, if the kids want to get home, they’ll have to find Dungeon Master.  This will be a lot easier said than done, however, especially given Kaladin and Jasnah’s uncertain loyalties.
All of which gives us with our new team:
1. Some of these names come from Brandon Sanderson’s Stormlight Archives.
By Danno E. Cabeza - September 21, 2017