My daughter Emma and I finished Marvel’s Cloak & Dagger on Freeform last week, and we both really enjoyed it.  Truthfully, I think I enjoyed it more than she did.  Before watching the show, I’d have guessed that it was aimed squarely at the teen-girl fan-set based on its choice of cable networks.  The reality, though, is that the former ABC Family Channel has more in common with Spike TV than it does with, say, The Disney Channel or even Lifetime.  Where we were expecting something along the lines of the CW’s Arrowverse but starring younger Marvel protagonists, what we got was a decidedly gritty psychological drama that was much more in line with the tone of the original 1980s-era comics than I’d have believed possible. 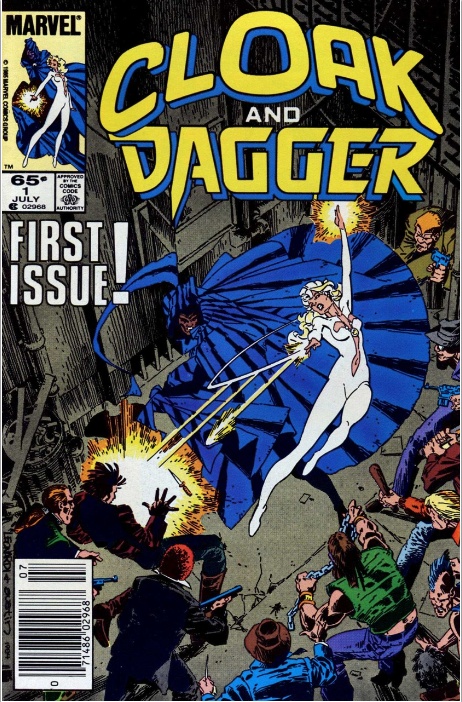 Cloak & Dagger hit the scene in the pages of The Spectacular Spider-Man way back in 1982, just as “grim and gritty” was becoming the thing.  This was right before Frank Miller’s The Dark Knight Returns.  Wolverine had only just started cutting mooks from Hellfire Club in half while The New Mutants was beginning to introduce teen/supernatural horror via characters like Magick and arcs such as “The Demonbear Saga”.  New York City was just recovering from the 1970s financial crises in real life; true revitalization lay more than a decade in the future.  If you believed President Reagan, there were crack dealers on every corner.  First Blood had just hit, and Lethal Weapon was just over the horizon.  Miami Vice premiered on television just as our heroes were getting their own book.
Against this backdrop, it should come as no surprise that drugs and teenaged kidnappings were the issues du jour.  Milk cartons had just introduced “Have you seen me?” posters, and 42nd Street was still mostly a red light district.  Cloak & Dagger invoked these menaces through their origins.  In the comics, Tandy and Tyrone were teenaged runaways who got snatched off the streets of New York.  Their powers came from via illegal experimentation at the hands of the Maggia, Marvel’s non-ethnic mafia, and the gangster Silvermane.  Silvermane’s goons were trying to create a kind of synthetic heroine, but the experiment backfired, killing most of its test-subjects while giving Tandy and Tyrone superpowers.   As was often the way with Marvel storytelling, our heroes became more of what they already seemed to be via their basest, most obvious interpretations.  Tandy, a beautiful white girl with a supermodel mother, became an embodiment of light and hope in a ludicrously risqué costume.  Tyrone, a black male from the wrong side of the tracks, became an avatar of fear, addiction, and darkness.  Their contrast was deliberately part of the story—for both better and worse.

I discovered Cloak & Dagger in the 5th or 6th grade, via the four-issue limited series that told their origin story.  I didn’t much care for—or even really notice—the book’s social justice aspirations.  I was more fascinated by its visual design, by Tandy’s deliberately hypersexualized costume and by Tyrone’s overtly horrific superpowers.  Cloak had the hottest girlfriend in the universe, but somehow he was eating people’s souls.  Cloak actually fed off of Dagger’s life force.
It totally blew my mind.

The best thing about the new show is the way it inverts expectations.  Tandy still has the power of hope, and Tyrone still has the power of fear, but their personalities are played deliberately against type.  Their origin is changed, too, to make their story more relevant to our modern context.  Gone are the drug dealers.  In comes mega-corporation Roxxon and an unscrupulous quest for cheap energy.
When we first meet Tandy, she is a hot mess.  Homeless, stealing shit, doing drugs, banging guys…  We see her roofie some dude she meets at a club, steal his stuff, then crush up and snort OxyContin pills on camera.  It’s unbelievable.  She’s a half-step from selling her body on the streets, and we get the idea that she pretty much knows it.  By contrast, Tyrone is a good dude who’s gone through some hard times.  He’s far from perfect, but he’s a standout basketball player and an honest, honorable young man, and that contrast absolutely works.  This first season sees our heroes struggling to use powers that aren’t an intuitive fit, and that’s great because it forces an extended journey into their shared psychology.  In the comics, Cloak & Dagger are just together.  The show, though, delves into the randomness of their pairing, often with admirable results.  I should say, too, that they get good mileage out of setting the show in New Orleans.  Cloak & Dagger might get a bit lost in Manhattan, but they make a lot of sense in the Big Easy.
My daughter Emma got frustrated after a while because Marvel’s Cloak & Dagger is not a superhero show.  Instead, it’s a legitimately slow burn, following a trajectory that’s broadly similar to the first season of Netflix’s Daredevil.  I personally liked all the psychological aspects and the use of music and mood, but Emma wanted to see more action.  Unfortunately, there are only a couple of episodes where we see our heroes fighting with their superpowers as Cloak & Dagger.  Mostly, they’re trying to figure out who they are and what they want.  That rang true to me, but my daughter hasn’t quite reached that stage in her life.

All of which makes Freeform an odd network for the show.  It’s is not a romance, it features elements that are decidedly adult, and it’s definitelynot chock-full of upbeat girl-power.  The show is vaguely sex-positive—maybe—but its heroines uniformly get their asses beat by powerful men, and most of the sex takes place in manifestly unromantic settings.  Sure, they could play a hookup in a car for romance ala Jack and Rose in Titanic, but that’s not how they play it here.  At all.  Really, the way these scenes are executed just reinforces how damaged these women are.  It’s more Jessica Jones thanSupergirl.  Which is fine in storytelling terms but weird on the network formerly known as ABC Family.
Anyway, I liked Marvel’s Cloak & Dagger and recommend it strongly to those who like comic book shows, but there were a few times that I regretted watching it with my daughter, especially in the early episodes.  We wound up with some teachable moments, and I guess that’s okay, but it was awkward at times to say the very least.
By Danno E. Cabeza - August 11, 2018