A lot has been said about the casting of Iron Fist.  Ultimately, I think Marvel decided to cast a white dude to play Danny Rand, so that they could make Rand dumb.  This is often the way he comes across in the comics.  But the choice appears to have frustrated most reviewers, and while I get that, I still see what Marvel was thinking.  Which is to say that if you’re Marvel, and what you really care about is the inevitable Power Man & Iron Fist Nteflix team-up show, you kind of need Danny to be dumb, and I can’t see how that works with an Asian dude playing the role.
Like, “Why is this Asian dude constantly getting scolded on the ways of the street by Luke Cage?”


It’s awkward if Rand is anything other than an entitled white guy.  And while I don’t think for a minute that they would actually go this way with it, I would fucking LOVE to see the Danny Rand / Misty Knight romance as played by Finn Jones and Simone Missick.  America might be ready to see a white dude with a black woman on television, but they’ll freak the fuck out if that woman is seven years older than her man.

That would be progressive fucking storytelling.
Imagine Iron Fist as a mob tale.  Danny is the son of a Brooklyn-based Italian mobster who’s obsessed with the idea of retiring to a little farm in southern Ireland.  Rand in this case is played by Sylvester Stallone’s son.  His father is played by Joe Pesci.  They get to Ireland, and dad gets whacked by the IRA, but then Junior is kidnapped by Celtic Druids, who for whatever reason decide to teach him the ways of Irish magic.  Rand then goes back to Brooklyn armed with Celtic power, determined to take back his dad’s territory from the IRA, who’re by now running drugs out of his dad’s old place in Red Hook.  But really, Danny’s superpower is that he’s a Brooklyn badass, and his authenticity as a Italian-Brooklynite is what will ultimately win the day.
This is essentially what Marvel has done with Iron Fist.  And yeah, that might work as a story, but I think we can all agree that it is still weird as shit.  It’s an idea that obviously would’ve made more sense had it been about an Irish guy reconnecting with his Celtic roots, which is mostly what folks have been saying about Iron Fist as it’s currently cast.  Which doesn’t necessarily make it bad, but it does explain why everyone keeps scratching their heads, wondering what-the-fuck? 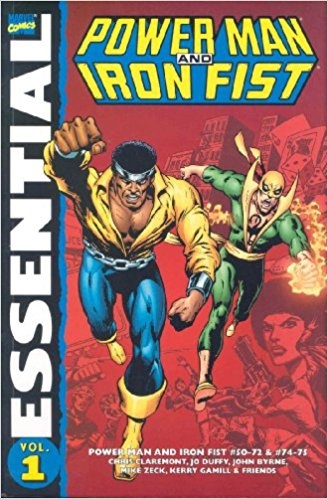 For what it’s worth, folks back in the 70s had much the same reaction.  I keep reading that Iron Fist was conceived as a way for Marvel to piggyback on the Bruce Lee craze of the time, and maybe that’s true, but the actual comic itself was not at all like a Bruce Lee movie.  It was a straight-up superhero book, starring a white guy in bright green and yellow pajamas who fought crime with kung fu.  Iron Fist wasn’t out there fighting black belts and ninjas for the honor of his dojo.  He fought giant robots and space wizards and the Maggia.  Sometimes he fought dragons and yetis and other critters from Kun-Lun.  Fighting Bruce Lee-style against other martial artists was exceptionally rare.  Rand was as apt to meet Dracula as he was to face off against a fellow black belt.
Readers groaned.  But really, sales weren’t held back because the book was about a white guy doing kung fu.  They were held back by the fact that Rand’s origin--standard comic book rich guy--didn’t stand out enough to give the book a hook in the marketplace.  Sound familiar?  This only changed when Marvel teamed Iron Fist with Luke Cage, a move made in desperation that worked because that was some seriously weird shit.  When paired with Cage, Rand’s origin--kind-of stupid, displaced white guy trying to figure out who he’s supposed to be--made a Hell of a lot more sense.  Because Cage is the same, only with a Harlem backstory.  As we saw on Netflix, Luke Cage is also not quite the man that others keep trying to force him to be.  When you stick him with Danny Rand, that really comes across.  Plus, pairing these two allowed Marvel to (very occasionally) tell stories based on the disparities of their economic circumstances.  I don’t know if you’ve noticed, but that’s still kind of a thing in American culture.
Nevertheless, this was striking gold by accident.  In the 70s, Power Man & Iron Fist was basically a last-ditch experiment tried as a way to revive sales on two flagging titles.  It worked for reasons that seem obvious now, but at the time, it was still just two superheroes fighting giant robots in Harlem.[1]  They did it in a way that caught people’s imaginations, though--wearing a silver tiara and a pair of green and gold pajamas, respectively--and here we are.


As I write this, it’s early Friday afternoon.  I haven’t seen any of Netflix's Iron Fist yet.  What I’ve read is that the show is a slow burn that seems to have struck reviewers badly.  Actor Finn Jones says that we need to see it all to see how it all comes together, and I’ll buy that.  But I’ll also admit that I’m really looking forward to the inevitable Power Man & Iron Fist team-up show, and I hope that shit comes sooner rather than latter.  Marvel has done a few decent Iron Fist solo stories, but the character in general is far more interesting as a complement to Luke Cage.  Even the Ed Brubaker / Matt Fraction Immortal Iron Fist is at its best when Cage and company show up.  I won't be at all surprised if this same dynamic plays out on TV.
[1] No really.  They fought giant robots at least half the time.
By Danno E. Cabeza - March 17, 2017